Yellow bird: Oil, Murder and a Woman’s Search for Justice in Indian Country by Sierra Crane Murdock at JoyLynne’s house on 10/29/2020 October 1, 2020 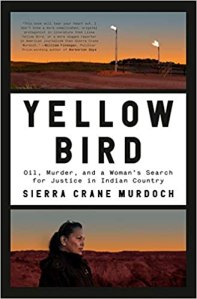 When Lissa Yellow Bird was released from prison in 2009, she found her home, the Fort Berthold Indian Reservation in North Dakota, transformed by the Bakken oil boom. In her absence, the landscape had been altered beyond recognition, her tribal government swayed by corporate interests, and her community burdened by a surge in violence and addiction. Three years later, when Lissa learned that a young white oil worker, Kristopher “KC” Clarke, had disappeared from his reservation worksite, she became particularly concerned. No one knew where Clarke had gone, and few people were actively looking for him.

Yellow Bird traces Lissa’s steps as she obsessively hunts for clues to Clarke’s disappearance. She navigates two worlds—that of her own tribe, changed by its newfound wealth, and that of the non-Native oilmen, down on their luck, who have come to find work on the heels of the economic recession. Her pursuit of Clarke is also a pursuit of redemption, as Lissa atones for her own crimes and reckons with generations of trauma. Yellow Bird is an exquisitely written, masterfully reported story about a search for justice and a remarkable portrait of a complex woman who is smart, funny, eloquent, compassionate, and—when it serves her cause—manipulative. Drawing on eight years of immersive investigation, Sierra Crane Murdoch has produced a profound examination of the legacy of systematic violence inflicted on a tribal nation and a tale of extraordinary healing.

Yellow bird: Oil, Murder and a Woman’s Search for Justice in Indian Country by Sierra Crane Murdock at JoyLynne’s house on 10/29/2020

Redhead by the side of the road by Anne Tyler at Karen’s house on September 17th July 31, 2020

Micah Mortimer is a creature of habit. A self-employed tech expert, superintendent of his Baltimore apartment building, cautious to a fault behind the steering wheel, he seems content leading a steady, circumscribed life. But one day his routines are blown apart when his woman friend (he refuses to call anyone in her late thirties a “girlfriend”) tells him she’s facing eviction, and a teenager shows up at Micah’s door claiming to be his son. These surprises, and the ways they throw Micah’s meticulously organized life off-kilter, risk changing him forever. An intimate look into the heart and mind of a man who finds those around him just out of reach, and a funny, joyful, deeply compassionate story about seeing the world through new eyes, Redhead by the Side of the Road is a triumph, filled with Anne Tyler’s signature wit and gimlet-eyed observation.

And the votes are in. It was a close race with one winner and 3 runners up so here are the next 4 books and meetings.

All the votes are in and we had a 4 way tie! So….let’s plan the next 4 book clubs. We can start with the short book since I am late getting my act together picking books.

Educated by Tara Westover on September 19th at Lori’s house

Shrill: Notes from a Loud Woman by Linday West on November 7th (this is 7 weeks because 6 weeks landed on Halloween) at Karen’s house

Time got away from me so I didn’t get nominations for new books etc, etc. So….I took the runner up books from the last three surveys and made them our next 3 books. I hope everyone is okay with that!

Hag-Seed by Margaret Atwood on July 19th at Silvercreek hosted by Susan June 15, 2018

Felix is at the top of his game as Artistic Director of the Makeshiweg Theatre Festival. His productions have amazed and confounded. Now he’s staging a Tempest like no other: not only will it boost his reputation, it will heal emotional wounds.

Or that was the plan. Instead, after an act of unforeseen treachery, Felix is living in exile in a backwoods hovel, haunted by memories of his beloved lost daughter, Miranda. And also brewing revenge.

After twelve years, revenge finally arrives in the shape of a theatre course at a nearby prison. Here, Felix and his inmate actors will put on his Tempest and snare the traitors who destroyed him. It’s magic! But will it remake Felix as his enemies fall?

Margaret Atwood’s novel take on Shakespeare’s play of enchantment, retribution, and second chances leads us on an interactive, illusion-ridden journey filled with new surprises and wonders of its own.

You don’t have to say you love me by Sherman Alexie on March 15th at JoLynne’s house February 12, 2018

Sherman Alexie’s memoir, You Don’t Have to Say You Love Me, is an extraordinary look at the complicated relationship between a remarkable mother and an equally remarkable son, set, mostly, in the Spokane Indian Reservation where Alexie spent his childhood. His whip-smart, sometimes cruel mother saved the family when she stopped drinking, but was inexplicably tough on her kids – something Alexie traces back to mental illness, sexual assault, and the Indian experience of violence and oppression. Family memoirs often seem like an opportunity for score settling, but Alexie is so aware of his own fallible memory and his own imperfections that this one won’t make you bristle. His style is idiosyncratic – passages of verse lead to passages of prose — but it’s readable, unpretentious, funny and deeply compassionate.

Dispatches by Michael Herr on November 9th at 6:30 at Big Grove hosted by Heidi November 8, 2017

From its terrifying opening pages to its final eloquent words, Dispatches makes us see, in unforgettable and unflinching detail, the chaos and fervor of the war and the surreal insanity of life in that singular combat zone. Michael Herr’s unsparing, unorthodox retellings of the day-to-day events in Vietnam take on the force of poetry, rendering clarity from one of the most incomprehensible and nightmarish events of our time.

Dispatches is among the most blistering and compassionate accounts of war in our literature.