A River Runs Through It by Norman MacLean

Gift from the Sea by Anne Morrow Linberg

I Who Have Never Known Men by Jacqueline Harpman

The Alchemist by Paolo Coelho

The Devil Made Him Do It?- Daniel Myers

The girls who went away by Ann Fessler

The Road by Cormac McCarthy

The Witch of Cologne by Tobsha Learner

Tropic of Cancer by Henry Miller

Amazon.com
Fans of Tender at the Bone and Comfort Me with Apples know that Ruth Reichl is a wonderful memoirist–a funny, poignant, and candid storyteller whose books contain a happy mix of memories, recipes, and personal revelations.
What they might not fully appreciate is that Reichl is an absolute marvel when it comes to writing about food–she can describe a dish in such satisfying detail that it becomes unnecessary for readers to eat. In her third memoir, Garlic and Sapphires: The Secret Life of a Critic in Disguise, Reichl focuses on her life as a food critic, dishing up a feast of fabulous meals enjoyed during her tenure at The New York Times. As a critic, Reichl was determined to review the “true” nature of each restaurant she visited, so she often dined incognito–each chapter of her book highlights a new disguise, a different restaurant (including the original reviews from the Times), and a fresh culinary adventure. Garlic and Sapphires is another delicious and delightful book, sure to satisfy Reichl’s foodie fans and leave admirerers looking forward to her next book, hopefully about her life with Gourmet. –Daphne Durham 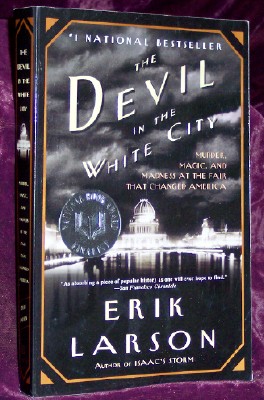 Author Erik Larson imbues the incredible events surrounding the 1893 Chicago World’s Fair with such drama that readers may find themselves checking the book’s categorization to be sure that The Devil in the White City is not, in fact, a highly imaginative novel. Larson tells the stories of two men: Daniel H. Burnham, the architect responsible for the fair’s construction, and H.H. Holmes, a serial killer masquerading as a charming doctor. Burnham’s challenge was immense. In a short period of time, he was forced to overcome the death of his partner and numerous other obstacles to construct the famous “White City” around which the fair was built. His efforts to complete the project, and the fair’s incredible success, are skillfully related along with entertaining appearances by such notables as Buffalo Bill Cody, Susan B. Anthony, and Thomas Edison. The activities of the sinister Dr. Holmes, who is believed to be responsible for scores of murders around the time of the fair, are equally remarkable. He devised and erected the World’s Fair Hotel, complete with crematorium and gas chamber, near the fairgrounds and used the event as well as his own charismatic personality to lure victims. Combining the stories of an architect and a killer in one book, mostly in alternating chapters, seems like an odd choice but it works. The magical appeal and horrifying dark side of 19th-century Chicago are both revealed through Larson’s skillful writing. –John Moe

The Perfect Vodka Martini is easy to make, and ultimitely refreshing. Try it!

2-3 Ounces of your favorite Vodka. I recommend Ketel One!

A miniscule amount of vermouth, if absolutely necessary.

Put the vodka and vermouth (if necessary) in a martini shaker full of ice, and shake. Pour that into the martini glass, add olive, and guzzle!